Since setting up the jar aquarium two weeks ago the water level in the jar has been rising. I removed water multiple times to lower it back but it kept overflowing which had me very befuddled last week. I even marked the neck of the bottle with the height of the water at different times of the day. The water does go up when the sun warms the bottle, but it does not return to the starting point the next morning. It slowly continues to rise. 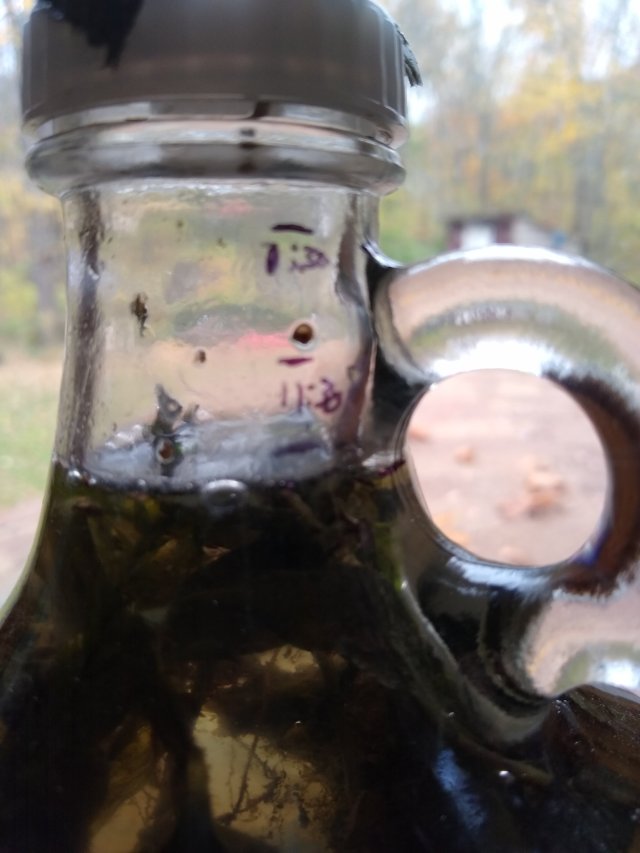 But I think I finally figured out the cause. Can you see it in the image below?

Bubbles. There is a large amount of gas trapped beneath the mud. These bubbles are created during the process that is breaking down the decaying plant life within the muck. The process probably goes faster when the sun hits warms the muck.

In the image above you can also see the tunnels that the worms have been making in the mud. I haven’t been able to capture a good photo of them.

I gave the bottle a good jolt and tons of bubbles streamed to the surface. Releasing the built up gas lowered the water level nearly back to its starting point.

After one week the water in the jar aquarium has cleared up and now you can see everything that happens with the jar. Which isn’t much. The tiny insects that were swimming around the top of the jar seemed to have died off. There is still one worm that I suspect is really a leech.

It remains to be seen if the plants will continue to grow. Some of them are starting to look a little brown.

But despite lack of life, the jar aquarium does still have something I’ve been watching daily. There’s a mystery to the jar that I’m trying to solve. The water level keeps rising.

At first I thought it was just heat expansion. The jar does get some direct sun. But the water doesn’t seem to move much during the day. After reducing the water back down to its original levels three times and then finding that the water had again risen to the top of the jar I’m not sure what is going on.

We all know about the Conservation of Mass right? Matter cannot be created or destroyed it just changes form. I expected some movement due to heat expansion, but I thought it would go up and down with the temperature. I also expected all the plants and dead stuff in the mud to create methane and other gases that would bubble up. So far, no gas bubbles, but the water keeps rising. Something within the jar is increasing in volume. Could it really be just the water heating up?

What do you think? Put your ideas in the comments! 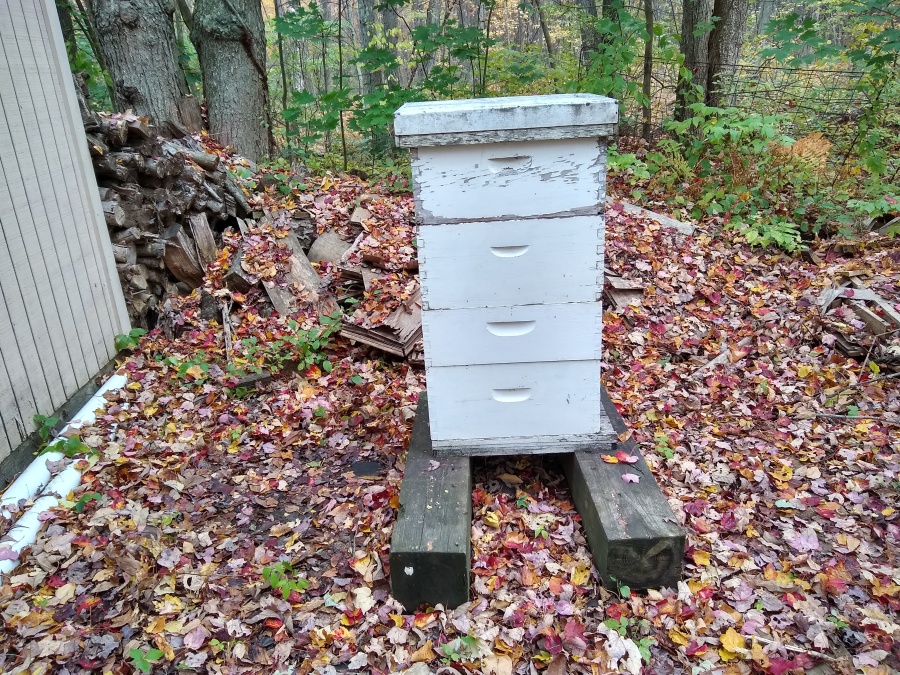 I checked in on the bees today to get them ready for winter. 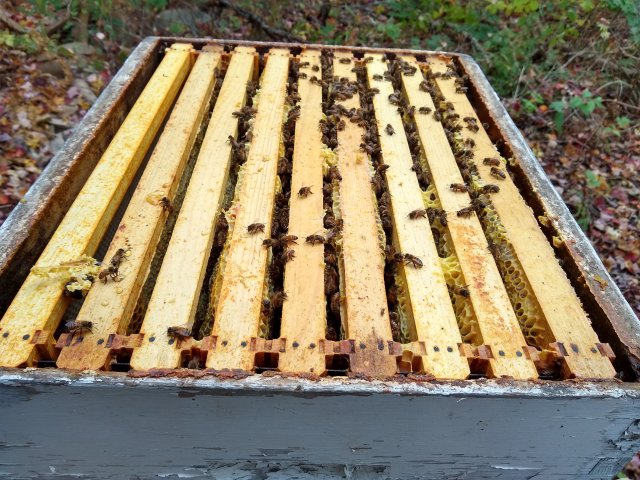 First removed one of the boxes that had a hole in the corner. The bees seemed to love the extra entrance during the summer, but that hole would’ve let the cold in all winter so it had to go. The bees were very upset I was moving their honey around. 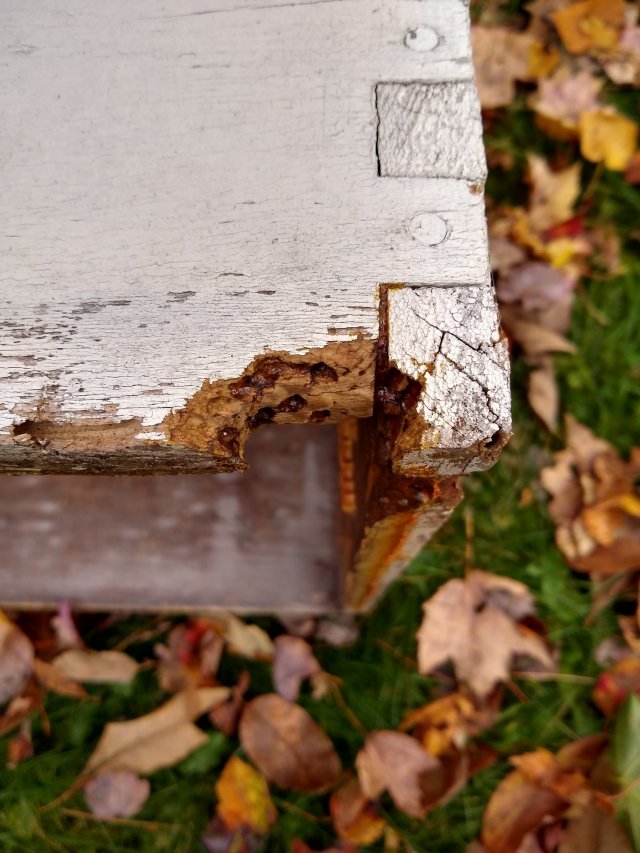 I scraped off some extra comb and got a little treat for myself.

There wasn’t much brood in the hive, which is a little worrying since most of the current bees will die soon and the bees that hatch out now have to survive all winter and keep the queen warm. That’s another thing that concerns me a little: I didn’t see the queen bee. I don’t always find her but I would’ve liked to confirm that she’s still alive before the winter. The bees were already getting angry with me so I did what I had to and got out as quick as possible.

I gave them their fall mite treatment and closed the hive back up.

Last thing I did was put the reducer in the entrance way. That will also help keep the cold out.

That’s it for today. Next time I check on the hive I will put a cork in the top entrance, and change the reducer to he smallest opening, again to keep out the cold. For now the fall has been very mild so I will leave it until we stay below freezing at night. 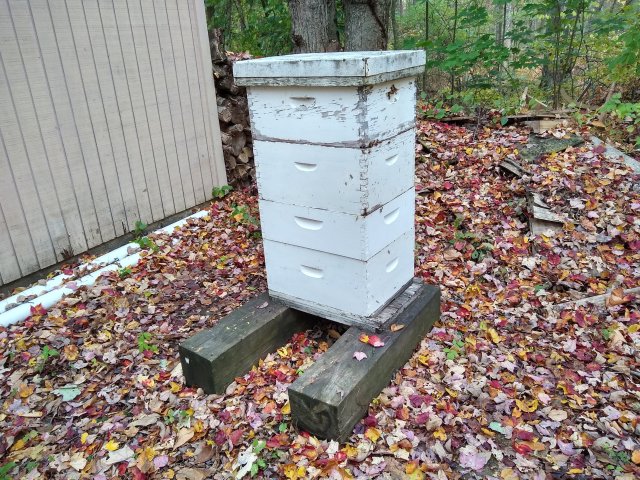 I filled a one gallon jug one-third full of muck from the swamp then filled the rest with the swamp water and added some aquatic plants for good measure. When I was done it looked like this: 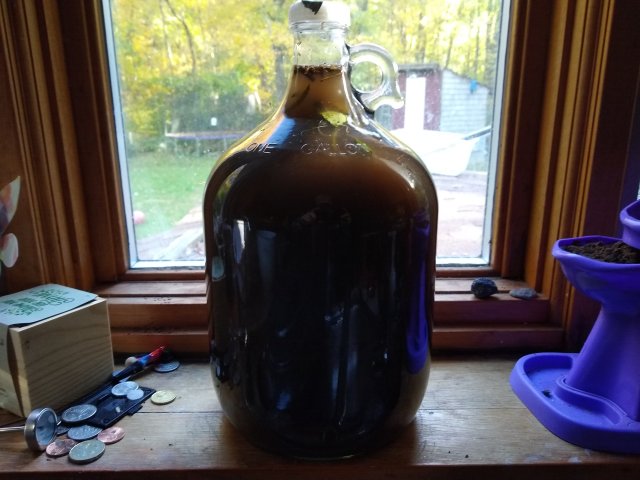 After twenty-four hours the water had cleared up a lot and now looked like this:

There’s even a few critters swimming around the top:

I’m hoping it will clear up even more this week and the plants will start to grow to create a self-sufficient ecosystem.

Recording The Angry For Days Solo